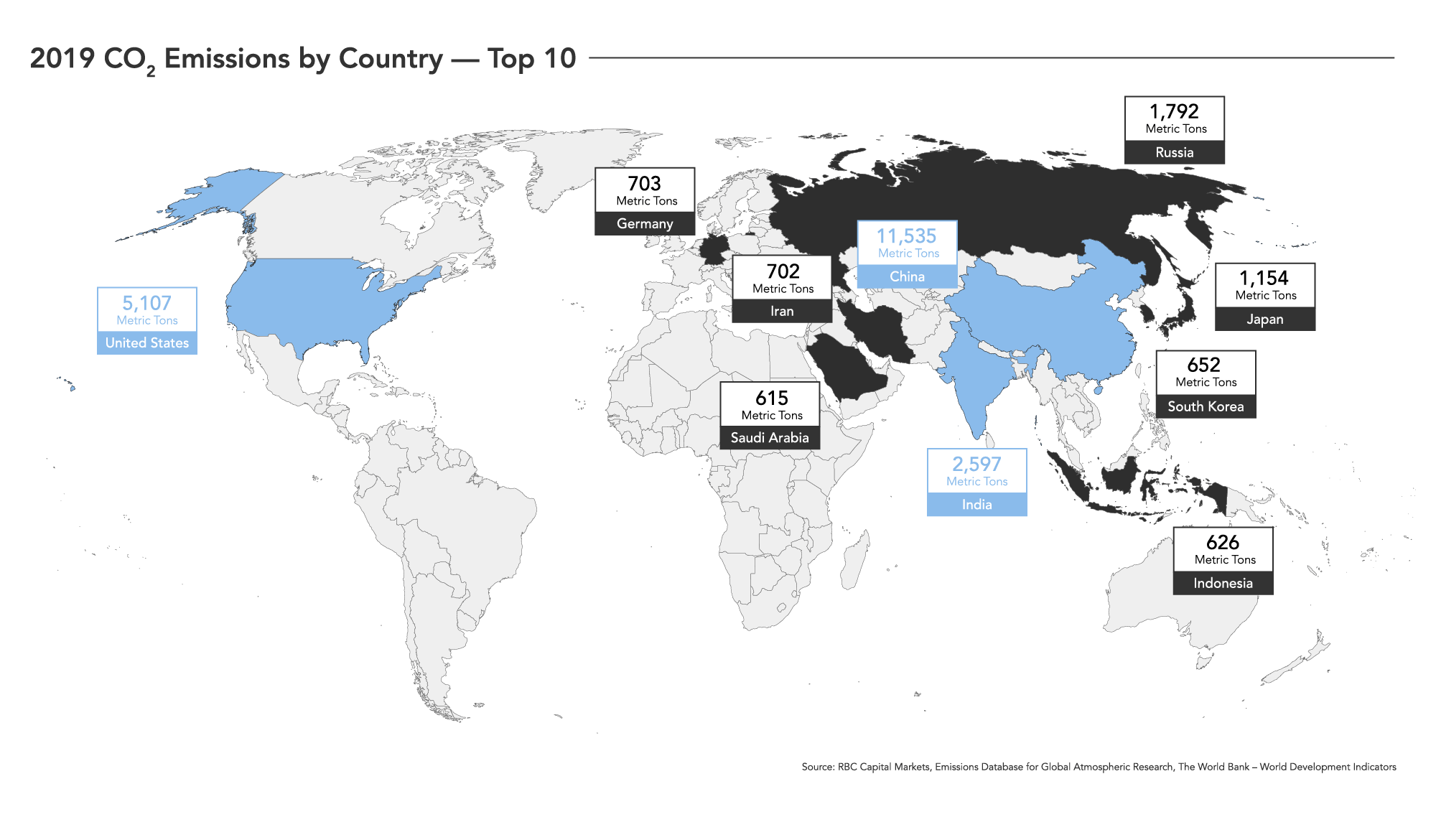 Global Crisis — The International Energy Agency estimates that CO2 emissions declined by more than 5% in 2020 as energy demand plummeted during pandemic lockdowns. Despite the decline, the agency found CO2 reached its highest-ever concentration in the atmosphere of 412.5 parts per million (Avg., Ann.), roughly 50% higher than levels at the dawn of the industrial revolution. Early estimates indicate emission levels have almost fully rebounded in 2021.

The concept of capturing and safely storing carbon created through fossil fuel consumption rather than releasing it into the atmosphere sounds like the rare proposal that could muster strong bipartisan support on Capitol Hill. Surely US lawmakers from both sides of the aisle could rally behind a process that mitigates climate change while protecting oil and coal jobs. Yet Exxon Mobile CEO Darren Woods carefully managed expectations on his company’s carbon management prospects when pressed by a research analyst during an October investor call. “I think trying to predict what’s coming out of that political process is – I don’t know if it’s as hard or harder than trying to predict where prices are going to go,” said Woods. Exxon CFO Kathy Mikells was even blunter later in the call when she noted, “carbon capture does need fuller policy support.”

On November 15, President Biden signed the Infrastructure Investment & Jobs Act, earmarking $12 billion for Carbon Capture and Storage (CCS) infrastructure investments. This CCS language was drawn from the earlier Carbon Capture Improvement Act — a bipartisan bill introduced by lawmakers from coal mining states to subsidize incentives for investment in carbon capture technology. Although the money committed on Capitol Hill is modest, CCS is deemed critical infrastructure coming on the heels of the COP26 climate summit in Glasgow, where the Biden administration reiterated a pledge that the US will achieve net-zero CO2 emissions by 2050. Achieving that goal bodes well for the business of catching carbon before it can reach the atmosphere.

The CCS process diverts CO2 emissions at energy generation and industrial facilities and stores them indefinitely in geological silos under the Earth’s surface. Once securely below ground, the CO2 will be sequestered for millennia. The technology has been deployed successfully on a small scale for decades. Currently, there are fewer than 30 operational programs globally estimated to capture a mere 0.1% of total CO2 emissions. The US leads the space by far, with Canada, Norway, Australia, and Persian Gulf states slowly expanding their efforts.

US CCS leadership was nurtured, as American innovation often is, by tax perks. Specifically, section 45Q of the Internal Revenue Code, which lawmakers adjusted in 2008 to provide a finite amount of tax credits for companies adopting capture and storage programs. The limited quantity of credits for taxpayers stunted adoption, as the Treasury Department estimated that just ten companies accounted for all credits claimed in the subsequent decade. 45Q was enhanced and expanded by Congress in 2018 to encompass Carbon Oxide as well as CO2, increase the dollar value of credits, and remove limits on the number of credits that a single company can claim.

The near-term economic cost of CCS adoption is not yet fully known. While capture is the most expensive part of the process, more infrastructure development is also required to transport and store the CO2 waste and may involve adopting fresh pipeline and maintenance regulations.

Research and development into CCS techniques were initially spurred on by business considerations other than climate change. Currently, the oil industry has a private sector leadership role in CCS resulting from a process called Enhanced Oil Recovery (EOR).

The EOR process involves storing CO2 in mature oil wells and using pressure to remove additional reserves from reservoirs that become harder to extract over time. The process, pioneered in the 1970s, has key environmental advantages over using water or chemicals to pump more fuel from the ground.

In October, the equity research department at RBC Capital Markets released a report noting CCS as a key investment theme. It also identified public companies with a combined market cap of more than $150 billion within their bank’s coverage universe already actively engaged in CCS to some degree. In recent years, private equity and venture fund managers have also entered the space aggressively. While the private sector rushes to capitalize on the global push to curb emissions, industry experts have quickly identified public-private partnerships as key to the adoption process. A primary conclusion of the RBC report stated, “In a world of shrinking CO2 emissions over time, large-scale capital investments in CCS will require long-term visibility on carbon prices (tax levies on GHG emissions), transferability of offset credits and durability of government policies.” As with any business dependent on efforts coordinated between private companies and overlapping regional, national, and international governmental bodies, the most significant risks to investors in CCS may prove to be political rather than economic.

Global Crisis — The International Energy Agency estimates that CO2 emissions declined by more than 5% in 2020 as energy demand plummeted during pandemic lockdowns. Despite the decline, the agency found CO2 reached its highest-ever concentration in the atmosphere of 412.5 parts per million (Avg., Ann.), roughly 50% higher than levels at the dawn of the industrial revolution. Early estimates indicate emission levels have almost fully rebounded in 2021.